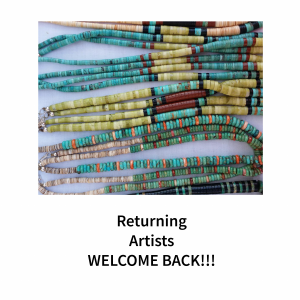 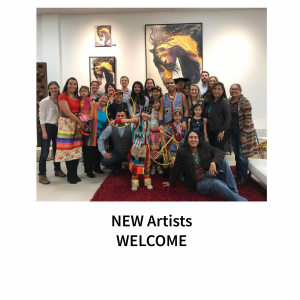 We want to thank all the American Indian artists who sell their jewelry, pottery, leatherwork, paintings, and other art pieces at our event.

We take pride in doing our very best to follow the guidelines of the Indian Arts and Crafts Act of 1990 and all subsequent regulations. The original spirit and intent of the law are to protect the sovereignty and integrity of AMERICAN INDIAN ARTISTS and the Traditional knowledge that has been passed down from generation to generation.

This ACT defines an American Indian artist as an enrolled member of any Federally or State-recognized Tribe (as defined by the law) of the United States/Canada or certified as an artisan by their Indian Tribe.

P.L. 101-644 makes it illegal to offer or display for sale, or sell, any art or craft product in a manner that falsely suggests it is Indian produced within the United States.

Penalties for violating this law are severe. For example, individuals can face civil or criminal penalties up to a $250,000 fine or a 5-year prison term, or both. In addition, a business that violates the Act can face civil penalties or be prosecuted and fined up to $1,000,000.

We want the public to experience the beauty and expertise of traditional and contemporary American Indian arts and crafts. The arts and crafts act is about truth in advertising. American Indian artists at our event have provided the documentation of enrollment or certification as artisans by their Tribe. We ask all artists to help us honor this commitment to authenticity and artisanship. Sells should be primarily one-of-a-kind products made by the artist representing the booth. Some Tribes and families produce products meeting the guidelines of Indian-made items, but they may appear Mass-produced. Information about the items such as blankets, clothing, t-shirts with Native style symbols should be presented to our committee before the event with information about their origins and, if approved, clearly labeled. These products may be trendy, but the primary items for sale at the artist’s booth should reflect the individual artisan.

****The Indigenous Institute of the Americas is a nonprofit organization dedicated to supporting accurate knowledge about the Indigenous people from all over the Americas. We want the public to be aware that the first American Indian Nations, who were protectors of what is now known as Texas, were harshly impacted by the political struggles that have taken place on these lands by foreign governments since 1528. These struggles are reflected in their many years’ fight to regain their inherent legal sovereignty.

Our Texas Tribes have been working on Texas State Recognition to receive the protections under the Federal Indian Arts and Crafts Act, Indian Child Welfare Act, and more. We hope this event can bring awareness to our unique history and legal struggles. The federal agency which oversees The Indian Arts and Crafts Act has stated that verification of state recognition comes from the Attorney General’s office in a state like ours with no Indian Commission. Unfortunately, we have not been successful in receiving this verification/validation from the State of Texas Attorney General’s office for any non-federally recognized tribes. If your Tribe/Nation can provide a letter from the Texas AG’s office to verify state recognition, we would be eternally thankful!

*State Recognition  “Any Indian group that has been formally recognized as an Indian tribe by a State legislature or by a State commission or similar organization legislatively vested with State tribal recognition authority.”